"What does the Ruhr area offer in terms of opportunities and prospects for the future? In 'Mapping the Region', artists who either live here or come from outside the region express their critical yet forward-looking takes on the Metropolis Ruhr, making use of all available artistic techniques to do so."
Dr. Kurt Wettengl, Director of the Museum am Ostwall, Dortmund, 2010

Mapping the Region – for the RuhrKunstMuseen, this was not just a snappy-sounding motto to be used during the area's appointment as European City of Culture as part of the RUHR.2010 campaign. It was part of the programme and would be followed to the letter. It was a large-scale, cross-city tool that would be used to connect the region. The new, compact charter with themed, on-site satellite exhibitions made good on its promise: the region located between the Emscher and Ruhr rivers, which used to be of key significance due to its steel and coal industries, was more than worthy of the cultural reinforcement pact. Mapping the Region clearly acknowledged the cultural landscape of the Ruhr as being one of the most concentrated in central Europe. 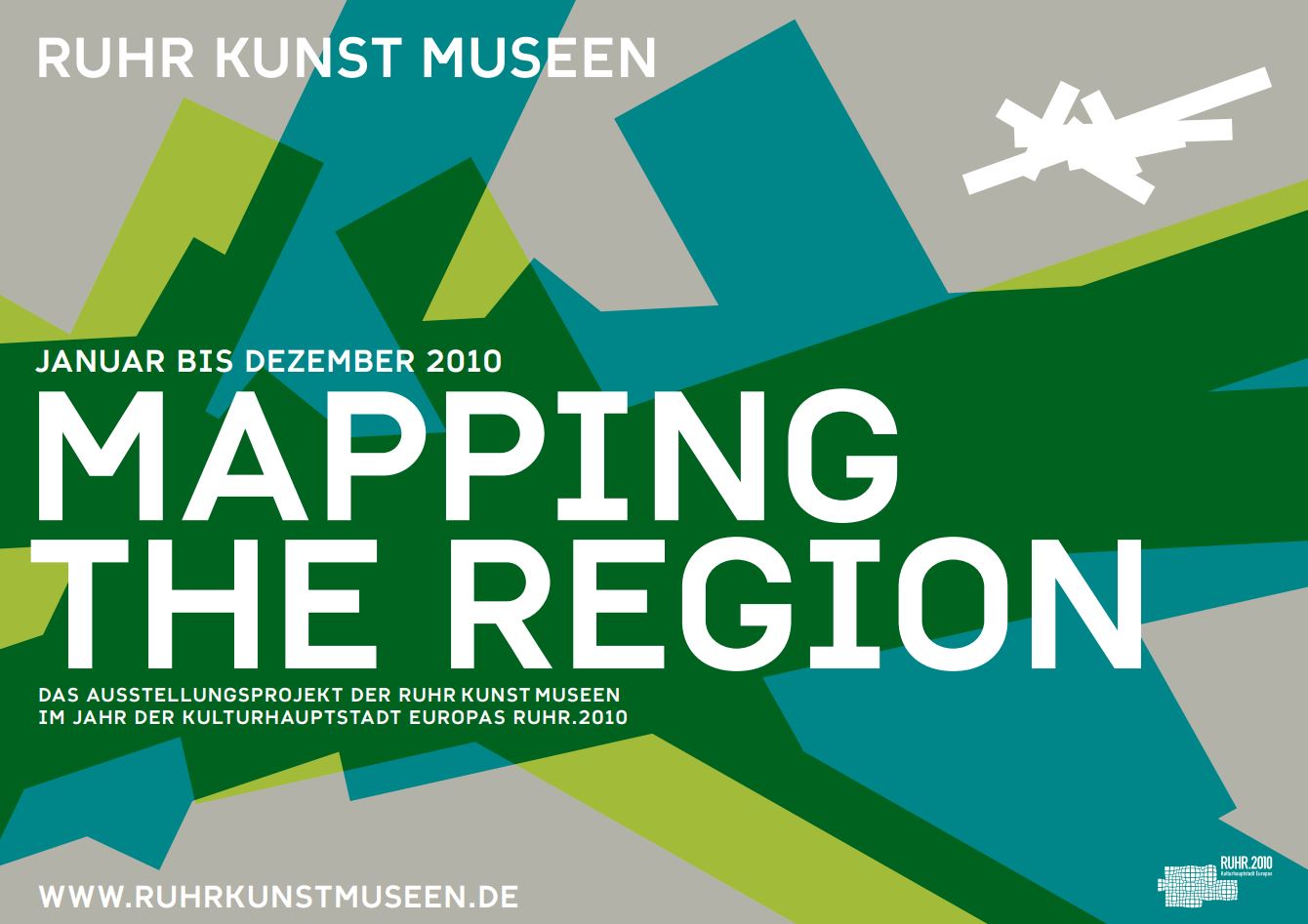 To date, this means investing in cultural education, shaking up the static structures which exist at the heart of the third-largest metropolitan area in Europe, and furthering the creative scene on the ground based on the characteristics and common features shared by the 170 nationalities which live here, going beyond merely measuring the facts to in order to promote a comprehensive network – Mapping the Region. And, true to the proverbial phrase "does what it says on the tin", the project name also points at what it wishes to achieve, i.e. turning visions into deeds which shape identity. 14 themed exhibitions across 14 RuhrKunstMuseen displayed their visions for a Ruhr cultural landscape. This included Mischa Kuball's "New Pott. 100 Lichter/100 Gesichter" in the Ruhr-Universität's Campusmuseum in Bochum or "Über Tage. Pixelprojekt _Ruhrgebiet" in the Kunstmuseum Mülheim in the city's old post office. The 14 art experiences were inspired by the central idea of the RUHR.2010 campaign which led to the area's appointment as European City of Culture: "Change through Culture, Culture through Change".

No sooner was the idea suggested than the RuhrKunstMuseen were on board. Art for structural change, art as structural change, culture as a catalyst in a region which is on the up. This was something that required illustration. What’s more, modern storytelling was called for, in order to explain how to approach the process of becoming something new. As well as to provide an exchange as to the direction in which the courage to re-invent oneself leads. 9 chapters set the pace for this story: understanding the Ruhr myth, designing a metropolis, discovering pictures, chancing theatre, living music, experiencing language, promoting the creative industry, celebrating festivities, moving Europe. The new RuhrKunstMuseen alliance, a network of museums which appeared in public for the first time in 2010, was formed to provide this structural change with a cultural face. A face which looks forward but is mindful of the past; which considers where we came from as well as where we are going. A face which can act as a model case for Europe.

"Mapping the Region" had some magical ideas – "liquid area" in the Flottmann-Hallen Herne, for example. Or "Unerwartet. Von der islamischen Kunst zur zeitgenössischen Kunst" in the Kunstmuseum Bochum. Over the course of a year, the RuhrKunstMuseen explored – both separately and within the binding central theme of promoting Ruhr culture – the question of what it could mean for the Metropolis Ruhr to be a community of disparate groups, for there to be a co-existence of many cultures within a culturally diverse landscape, and the extent to which art and aesthetics contribute towards this integration. This was the first time ever that the decentralised Ruhr area had been conceived of as a city of possibilities, imagined as a single entity comprised of diversity against the backdrop of art, museums and the urban space. "Get creative!" was the message.

The mapping and cartography methods which have been used in artistic production since the 1950s were perfect for this. Looking backward, looking forward, thinking laterally, experimenting clearly – the RuhrKunstMuseen used "Mapping the Region" to promote the transformation of existing structures. Since then, everyone has been able to agree on one thing: "The Ruhr area no longer breathes coal dust, it breathes the future." (Adolf Muschg, Swiss poet, author and literary scholar during the Ruhr area's appointment as European City of Culture under the RUHR.2010 campaign)