"The group exhibited their art in the conference suite of a hotel in Recklinghausen; 31 sculptors and painters were involved. After the exhibition opening, the city invited everyone to a hearty pea stew (at the time, that was an unbelievable amount of attention to receive) to celebrate the founding of the group, and endowed an art prize of 1000 deutschmarks which, from that moment on, was to be awarded to young German artists."
Thomas Grochowiak, painter and 2nd director of the Kunsthalle Recklinghausen from 1954, on the event of the junger westen exhibition (young west exhibition) from 4th Sept. to 3rd Oct. 1948 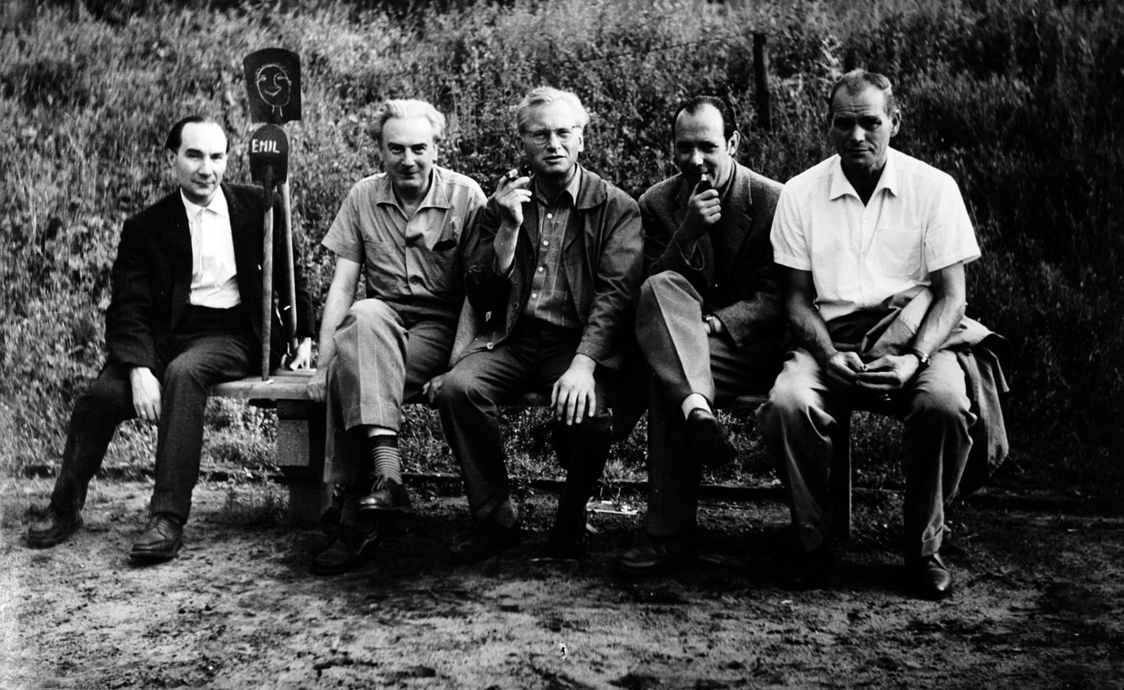 Nothing can get around it, none of the RuhrKunstMuseen, nor anything which explores the history of the area after '45. With its artists and its founding myth, the junger westen group wrote art history. And unique art history at that. Where else in the post-war ruins of Germany were power poles and hoist machine operators painted so peacefully next to abstract motifs? For the RuhrKunstMuseen, this is a unique repository of area-specific art history.

The Ruhr Area as a source of Modernity

The phenomenal aspect of the junger westen group was that it acted with a triple effect. First of all, founded in Recklinghausen in 1947 as a syndicate of artists, the group deeply inscribed itself within Ruhr culture. Secondly, as an artistic upheaval located somewhere between a continuation of the old ways and the establishment of a new beginning, the group promoted Modernism and helped raise awareness for "art which was freed from any form of state paternalism" (Adolf Grimme, 1946). And, last but not least, until today, the junger westen is the name of a prestigious prize which promotes young talent in true European form: standing for cultural development, for the conveyance of history, for remembrance and revival.

Best in the West

What would the Ruhr area be without its junger westen? It goes without saying that the RuhrKunstMuseen decided to arrange something extra special for the 70th anniversary of the founding of the group in 2017. Multiple retrospective exhibitions – a homage to the junger westen and to their enlightening new form of contextualisation – were put together. These served as a reminder of that which, on the invitation of art historian and later first director of the Kunsthalle Recklinghausen, Franz Große-Perdekamp, was gathered together in 1947 in the empty food floor of the Althoff department store by Recklinghausen's marketplace: the very first art exhibition to take place following the destruction of the area in the war, today, this collection is the stuff of legend. This is because, above all, this early show served as a declaration: instead of living in fear, the artists dared to set about establishing a hopeful new beginning based on an explicit commitment to freedom and democracy following the Nazi dictatorship, the Holocaust and the horrors of war. This was the initial spark for the founding of the progressive group of artists, the junger westen, in 1947.

Back to the Beginning

In February 1948, Franz Große-Perdekamp determined that the junger westen were founded on 5th September 1947: "When the young artists' exhibition opened in the Althoff building". However, it is unknown whether documentary proof of when the junger westen disbanded exists. The important group of artists were active until around 1962. The founding members were comprised of Gustav Deppe, Thomas Grochowiak, Ernst Hermanns, Emil Schumacher, Heinrich Siepmann and Hans Werdehausen. Together with the art prize, endowed by the city of Recklinghausen in 1948 and named after the group of artists, the junger westen represent an important source of post-1945 German art.

While the Märkisches Museum Witten and the Kunsthalle Recklinghausen presented the group of artists in their entirety over two overview exhibitions, the Museum DKM in Duisburg dedicated itself to the creative work of Ernst Hermanns. In doing so, Hermanns' sculptural works were presented alongside works from other recipients of the junger westen art prize. The Kunstmuseum Gelsenkirchen exclusively displayed paper-based works. In addition to graphics and lithographs from Deppe, Grochowiak and others, the museum also exhibited drawings, collages and etchings from their contemporaries, such as Hubert Berke, K. O. Götz or K. R. H. Sonderborg. In Bochum, not just one but two exhibitions focused on the group. The Kunstmuseum Bochum provided an impressive display as to how the artistic impulses which originated in Recklinghausen manifested themselves not only in the international art scene, but also directly in Bochum's art scene. On the other hand, the Ruhr-Universität's Campusmuseum dealt with the special relationship between the group and art critic and collector Albert Schulze Vellinghausen. Heinrich Siepmann took centre stage in the Kunstmuseum Mülheim an der Ruhr. The works displayed there illustrated the path taken by Siepmann, who died in Mülheim in 2002, towards the abstract. The series of exhibitions was rounded off by moderated discussions and presentations, as well as tours of public art. After all, the junger westen also left their mark in the field of public art – for example in Mülheim's city hall ("Spiralnebel" by Siepmann), the Festspielhaus in Recklinghausen ("Aufbruch der Elemente" by Werdehausen) or right in the middle of Gelsenkirchen's city centre ("Reliefwand" by Hermanns).